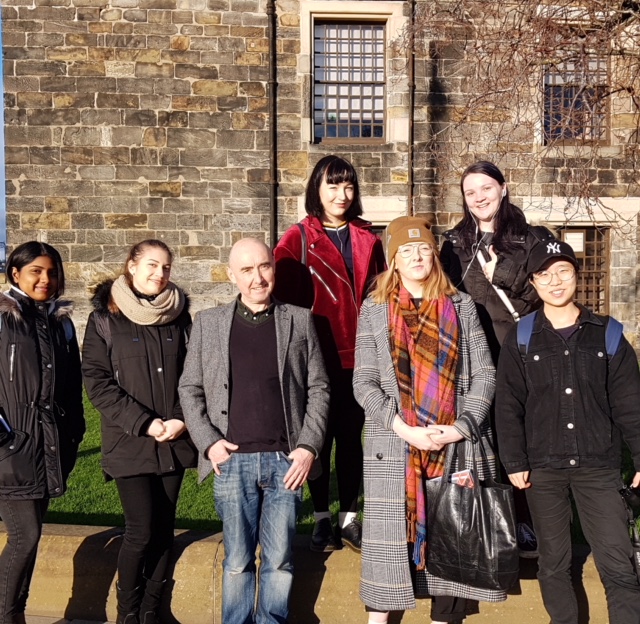 “we live in a multimodal society that makes its meanings through the combined use of semiotic resources (e.g. spoken and written language, visual imagery, mathematical symbolism, sculpture, architecture, gesture and other physiological modes). Multimodality refers to the fact that all texts combine and integrate diverse semiotic modalities.”(Wu,2014)

The Making of a Proposal

After completing our introductions, we were organised into small teams of five or six students -our first task was to identify ourselves to our fellow students and then to pinpoint the skill sets of our group, which would naturally differ from group to group.

Our group, the Paisley Foundlings, consists of:

Three of our number are also foreign language students, which may or may not impact on the effectiveness of intra-group communication of ideas/concepts. Time will tell.

We looked at various organisational team management systems to determine our strengths and weaknesses and therefore identify any gaps in our arc of skills which could be addressed-or perhaps effect the direction our collaborative project would take.

After completing the Belbin diagnostic tool, we found that our group had strengths in the role of the “Plant”- ideas people, who generate concepts and original ideas, and also “Company Workers”-who basically listen and build relationships and who have a keen interest in the social aspects of interaction within the team.

Our weak areas appear to be in the Complete/Finisher and Monitor/Evaluator areas. This essentially means that we have to be aware that we deliver on time and be cognisant of the fine detail of what is required of us.

We have been joined by a new group member, Harini, from Chennai, India. Harini`s field of study is also Digital Arts/Film making.

The project itself is now in the formulation stage. Our preliminary strategy is to put together a proposal for a sonic/video installation in the Abbey itself.

This will include a mixture of ambient soundscapes and also more defined music – perhaps 2 musical works, combining with abstract visuals and also more concrete documentary-style footage relating to specific historical evidence and creative/poetic extrapolations of the Monastic life in the Abbey`s pre-Reformation history.

Linzi was this week`s Chair and she drew out the various roles that we will be occupying to kickstart the project off.

To this end it was agreed that we should have a day trip to the Abbey on Monday 28th to view the Abbey and drain in situ- enabling Heather our sound production student to record found sound onsite and Cindy our photographer to visually record our field trip for the installation.

Being mindful of the fact that we have an initial assessment for the group proposal next week, I thought I should move forward and start writing material for the others to get their teeth into.

“I found meaning, I found form I found beauty I found warmth

Float over the rooftops and into the night”

This is in reference to inscribed slates of polyphonic music found in archaeological digs in the Great Drain itself-the earliest examples of which ever found in Scotland.

My concept is built around the fact that this music has lain undiscovered and un-played for over 600 years, with the unearthing bringing them back to life, like the watering of a long-dormant seed.

As Kreutziger-Herr points out, “Unlike all other historical artefacts and remnants of material culture, music is irretrievably lost when history progresses…a musical artefact is only present when it is completely gone.” (Kreutziger-Herr, 2009)

I have passed this embryonic song on to my fellow songwriter Linzi and Heather our sound producer to reflect on, to critique and to feedback on.

Over all there was great interaction in the group, although I was conscious of the fact that 3 of our number-the foreign language students- were pretty quiet. Perhaps the Scots in our enthusiasm were speaking too fast for them to keep up? We will need to bear this in mind when our group gets together.

I have now completed my song lyric and Heather has booked studio time for recording. This will be on Monday February 11th.

We congregated at the Abbey around 1.30 and proceeded to document our visit. The accompanying photos highlight some of the invaluable preparation work we accomplished here. 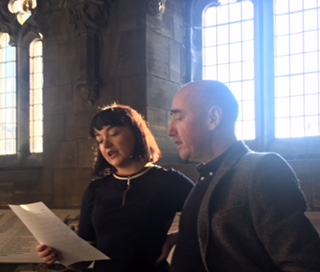 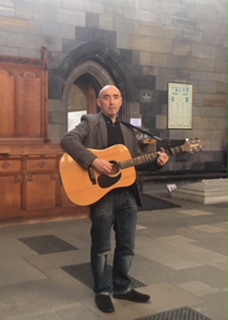 As my song was now complete, we decided to record an acoustic version in the main body of the Abbey to capture the tremendous natural reverb of the great stone space to incorporate into Heather`s “found sound” ambient collage. Linzi and I also sang a section of my work a cappella, using the wordless Gregorian/Cluny melismatic tradition to draw together and highlight the differences and similarities between Medieval and modern singing traditions.

“A melisma occurs when more than one note is sung to a single syllable. Melismas are common, for example, in Gregorian chant where a florid sequence of pitches is associated with a relatively small number of syllables.” (Johnson, Huron and Collister, 2014)

We then relocated to a local coffee shop to piece together our proposal and work out who would present which areas of our collaborative plan.

Our presentation in front of our fellow course members seemed to be well received. I think we presented our proposal well, with all members of the group participating.

It became evident that there are 2 other collaborative groups looking to present their project in the Abbey , and it was pointed out that perhaps we should look to combining our output and so come together in the Abbey space on the same day. This would obviously be beneficial for everyone involved-primarily to minimise disruption for the Abbey trustees and also maximise audience potential for the 3 collaborative groups, as well as realising the benefits of pooling our resources for technical equipment, publicity/pr and logistical needs. 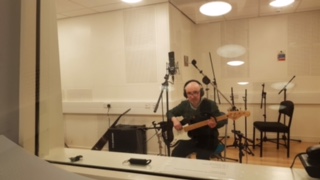 Finally we can start on the recording! My song contribution is called “Found”, and over the next 2 weeks or so Heather and I will endeavour to record and mix it. I will be using Heather`s skills as a sound engineer but also her talents as a keyboard player to augment my recording. Linzi will also be involved as she has agreed to sing backing vocals , especially to highlight the chant effect in the instrumental  breakdown of the piece.

Highrise and motorway junctions float by me so graceful and sleek

Silvering rivers of concrete are tracing the Ancient reborn

Tears shed my patience rewarded from past tense to present again

The university studios can be booked in  3 hour blocks, so this 3 hour window means we had to be laser-focused on what we planned to achieve in the time available. It was therefore my intention to record and double-track the main rhythm guitars, a double-tracked high guitar part, a main vocal and backing vocals, with special emphasis on the instrumental break of 16 bars in which I wanted to conjure up an chant-like atmosphere using vocals on very sparse instrumentation.